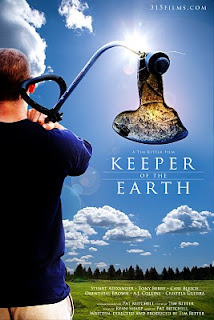 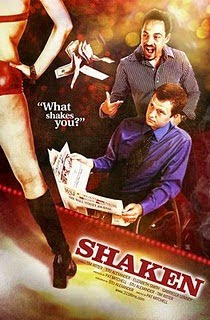 Those of you who missed the premieres recently can catch Shaken and Keeper of the Earth on the big screen this week when both show at the Fort Myers Film Festival. Those who have seen the two 315 shorts already can watch again and further absorb the layers of meaning and strong performances.

SHAKEN
First will be Shaken, which will lead off a three-film showcase at 7:45 p.m. on Thursday, the festival's first full day of programming, at the Sidney and Berne Davis Art Center. Shaken (23 minutes) follows Frank as he turns to old friend and renowned player Sonny to help him get back on his feet after getting dumped by his fiancee. Directed by Pat Mitchell and written by Stuart Alexander, the film stars Alexander, Tim Ritter, Gabriella Lennep and Marty Wisher.

Following Shaken will be The Eagle and the Pit: In the midst of WWI, a young American waits in the trenches for his first experience on the battlefield against the Germans. He meets a seasoned infantryman who shows him that it's much easier to talk about killing than actually engaging in the act. (9 minutes)

Closing the showcase will be Emergency Contact: Mike Lafferty was woken up by a disturbing phone call this morning. He found out a girl he used to casually sleep with was killed in a car accident and he is her emergency contact. It is his duty and responsibility to inform the family — whether they know him or not. (28 minutes)

KEEPER OF THE EARTH
Keeper of the Earth will show as part of a local film showcase at 1 p.m. on Saturday at the Alliance for the Arts. Keeper of the Earth: Young Adam's summer working the fields is almost over; now with the help of old friends G and Nathan, he has to decide what to do with the rest of his life. Written and directed by Tim Ritter, starring Stuart Alexander, Tony Berry, Carl Bleich, Orenthial Brown, A.J. Collins and Cristela Guerra. (14 minutes). The film will be the second in a three-film set.

Leading the showcase will be Sandbars to Sanibel by Rusty Farst: Set on Sanibel Island, Florida, in the Gulf of Mexico in 1929, the mail girl soaks the mailbag and the whole town gets their hands a water soaked letter trying desperately to find the recipient, resisting the temptation to read its contents. A love affair ignites, a school house goes berserk, and a small village becomes re-united. Point of view camera angles keep the audience suspended in the action. (27 minutes)

Closing the showcase will be The Right Friend by Gail Kowatch: A woman numb from a tragic loss must make an important decision. Her inner voices, visually represented as two friends, guide her. In the meantime, she is oblivious to signs everywhere providing gentle and loving support towards the right decision. But will she be too late and make the wrong decision? (15 minutes)

The festival will then shift to Sidney and Berne Davis Art Center for wall-to-wall films Thursday through Sunday. Alliance for the Arts will get in on the act with films from 1-6 p.m. Friday and Saturday.

Then the busy week will close with the Black Tie Awards Gala Dinner at the Broadway Palm Dinner Theatre at 5 p.m. Sunday, when awards will be bestowed, winning films screened and local filmmaker John Biffar honored.
Posted by 315 Films at 5:53 PM