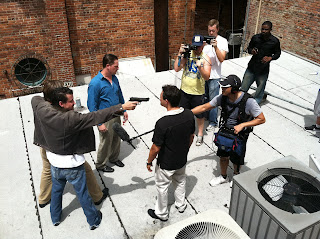 The 315 Films crew launched into another productive day of shooting for feature film Moment of Truth on Sunday, ranging from heavily armed threats on rooftops to mysterious meetings at the United Cafe in downtown Fort Myers to stabbings and shootings across town.

Moment of Truth is now in its home stretch, with only a few shoots remaining until production wraps. Stay tuned for more updates. (photo by Dave LePage)
Posted by 315 Films at 8:19 PM