MoT crew gets back to work 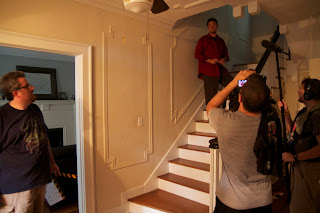 The 315 Films crew got the ball rolling again on their upcoming feature film Moment of Truth on Sunday, shooting several scenes in Fort Myers. Veteran 315 performer Tony Berry made his first appearance on the MoT set, joining castmembers Stuart Alexander, Danny Rawley and Vladimy Bellefleur for some charged and dramatic scenes.

Also on hand were Martin Lemaire, standing in as cameraman, as well as Kyle Austin, Ted Souppa, Crystal Gossman, Tim Gunderman and Nick Twardus. The crew will be launching back into action soon to finish Berry's portion of the film, so stay tuned.
Posted by 315 Films at 10:40 AM