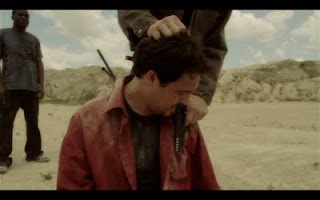 The 315 Films crew braved the blazing sun Thursday to finish shooting for the trailer for its first full-length film, Moment of Truth, while also getting some footage in the can for the film's opening scene. Stuart Alexander took the brunt of the punishment while playing the lead role of Jess Rabaras, who is dragged out into a desolate landscape to be murdered before he is saved by a mysterious stranger. Also on hand for brief appearances in other shots were actors Michael Dunsworth, Chris Marzella, Vladimy Bellefleur and Jean Roody Henry.

Behind the camera were the talents of writer/director Tim Ritter, cinematographer Perry Wilson, lighting specialist Pat Mitchell, boom operator Bryan Davis, script supervisor Jackie Gomez and makeup artist Nykkie Rizley, who shined in making the cast as bloody and nasty as possible while staying true to the film's hard-edged realism.

The trailer should be ready within the next few weeks. To get involved in the project or contribute, e-mail 315 Films at contact315films@yahoo.com.

Moment of Truth follows Jess, who is spared at the last moment from a grisly death. Now, on the run with dangerous criminals on his trail in a town filled with enemies, he must face his biggest choice.
Posted by 315 Films at 6:08 PM