Shooting resumes on Moment of Truth 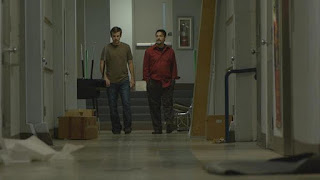 Production picked up again on Dec. 18 for a jam-packed 14-hour day that included the shooting of five scenes for Moment of Truth. The day started in the morning at a Fort Myers elementary school and carried through nighttime at an aging house in a decaying neighborhood, including a stabbing and plenty of building tension.

On hand to lend strong performances were castmembers Stuart Alexander as lead character Jess Rabaras, Mitchell Jacobs as his young charge Nicky, Vladimy Bellefleur as Nicky’s older foster brother Joseph, Michael Dunsworth as the fearsome Henchman, Sam and Hannah Holmes as the young Jess and Rachel, and Donovan and Delaney Souppa as other children.

Joining writer/director Tim Ritter behind the camera were cinematographer Perry Wilson, sound man Jayson Martinez, script supervisor/assistant director Ted Souppa, makeup artist Nykkie Rizley and co-producer Pat Mitchell, as well as homeowners Chuck and Sue Balero, who offered their home for the crew’s use and one of the film’s key locations.

Production will start up again in late January. Stay tuned for more updates.