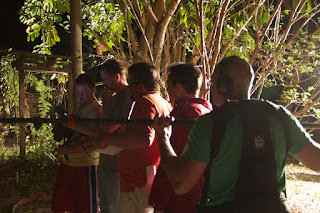 The 315 Films crew spent a busy day Tuesday shuffling between three locations and getting a big chunk of footage shot for its first feature film, Moment of Truth. The day started at the location serving as Joseph's house in Fort Myers, then across town to the house occupied by Jess' father, then back to a Fort Myers gas station. Along the way, characters were hit with cars and beaten half to death.

On hand for the shoot were writer/director Tim Ritter, cinematographer Perry Wilson, sound man Martin Lemaire, assistant director Ted Souppa, script supervisor/behind-the-scenes director Ashley LaRue and castmember Tim Gunderman, who took a break from serving as the sinister Doctor to help out on set. Anchoring the scenes with powerful performances were star Stuart Alexander as the desperate Jess Rabaras and Vladimy Bellefleur as Joseph, a mysterious figure from Jess' past.

Synopsis: On the run from the mob, Jess seems headed toward a gruesome death. But when he is spared at the last moment, he has to find out one thing: Why? Written and directed by Tim Ritter. Starring Stuart Alexander, Jennifer Keister, Tony Berry, Mitchell Jacobs, Shawn Genther, Michael Dunsworth and Vladimy Bellefleur.
Posted by 315 Films at 7:33 PM