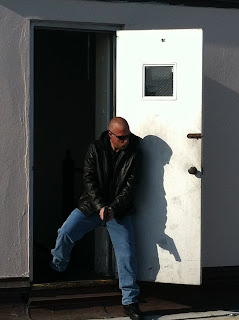 The 315 Films crew picked back up shooting on debut feature "Moment of Truth" on Sunday, leaving only one full day of production remaining. But this day, scattered at four locations around downtown Fort Myers, included chases down back alleys and fights on rooftops as well as quieter, more dramatic scenes in which the actors got to flex their thespian muscles. Those actors included Stuart Alexander, Jennifer Keister, Vladimy Bellefleur and late addition Dave LePage. Shooting sites included the Sidney and Berne Davis Art Center, United Cafe, the roads in the shadow of City of Palms Park and Mike Kiniry's house not far from downtown.

The cast and crew are looking forward to finishing up in December. Stay tuned for more updates.
Posted by 315 Films at 6:54 PM