Crust back on the big screen 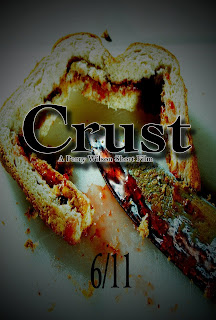 Perry Wilson's award-winning short film Crust will be getting its Orlando premiere on Sunday when it shows at the Enzian Theater's popular FilmSlam series. Each winning film in the monthly series  is guaranteed a spot in the 2013 Brouhaha Film & Video Showcase, whose winner is an automatic entry into the Florida Film Festival. Crust saw its debut in the 2012 Fort Myers Film Festival, where it won the Best Short Short award.

In Crust, another dreary morning means another typical meal for a bored husband. This may be the breakfast that brings some change — he's prepared to make sure of it. Crust is written and directed by Wilson and stars Shawn Genther and Laura Nin.
Posted by 315 Films at 6:26 PM