Moment of Truth takes next step in postproduction 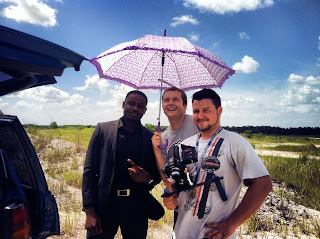 (Actor Vladimy Bellefleur, director Tim Ritter and
cinematographer Perry Wilson get a little silly on
the last pickup shoot for Moment of Truth)

After getting a few final pickups with actors Stuart Alexander, Vladimy Bellefleur and Dave LePage at the Sidney and Berne Davis Art Center in downtown Fort Myers and then in Estero, Moment of Truth will continue its long road through postproduction. Director Tim Ritter, who was joined at the recent shoot by cinematographer Perry Wilson and second assistant director Nick Twardus, has finished his edit of the film and turned the project over to second editor Mikhail Howell for a polish. Once that's finished, the film will go to Martin Lemaire for foley and mixing and Andrew Scott Foust for a rousing musical score.

Stay tuned for more updates from the production here and at momentoftruthfilm.com.
Posted by 315 Films at 12:32 PM